According to Foucault, the state intervention of neoliberalism is Kantian; it is designed to act on the conditions of the social to create the possibility of competition and enterprise. Neo-liberalism is opposed to the specter of the passive consumer just as much as various forms of leftism and anarchism. Second, the philosophical roots of neoliberal intervention can be traced back to the roots of German neoliberalism in the philosophy of Husserl. In this case, competition does not arise naturally but only as an essence that has to be constructed and formalized; neoliberalism is Husserlian. Foucault remarks that according to Marxism, there can be only one capitalism with one logic, contrasting this with the historical institutional argument that capitalism is a singularity with different possibilities. Neoliberals then try to invent a new logic for capitalism. 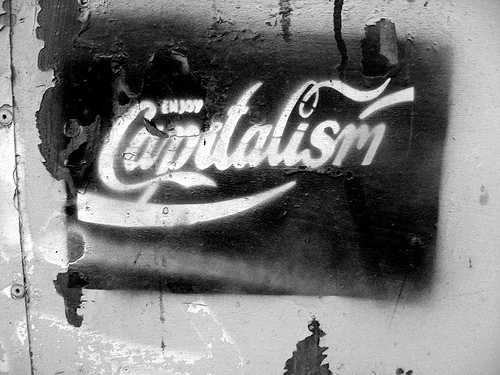 If we accept that we are not dealing with an essential capitalism deriving from the logic of capital, but rather with a singular capitalism formed by an economic-institutional ensemble, then we must be able to act on this ensemble and intervene in such a way as to invent a different capitalism.

For Benjamin Noys, the neoliberal government intervention is no less dense, active, frequent and continuous than in any other system. The difference is rather the point of application. It intervenes on society so that competitive mechanisms can play a regulative role at every moment and every point in society and by intervening in this way, its objective will become possible, that is to say a general regulation of the society by market. The necessity is to analyze how neoliberalism creates a new form of government in which state performs a different function, permeating society to subject it to the economic.

Despite the aggressive role the state plays, Noys tells us it misses the point to identify neoliberalism as another form of statism, rather the state subjects society to the economic. Now which “economic” would that be? The only “economic” Noys mentions are competition and the market. To this point in his 2010 paper, Noys has not even discussed capital the social relation itself. The single social relation that connects classical liberalism to fascism to neoliberalism is itself never discussed by Noys.

How the fuck does this happen?

Noys explains, “the state constantly intervenes to construct competition at all levels, so that the market economy is the ‘general index’ for all governmental action”, but Noys never explains that this construction is not ideology driven but aimed at the production of surplus value. What Noys never mentions is that the state itself is acting as the social capitalist and is imposing a capitalist regime on all of society. This is important for Noys to ignore because, despite his actual narrative that this is the action of the fascist state, the real problem identified by Noys is the market. It is not that the state is functioning as society’s capitalist, but that it is doing this by imposing the market on society.

Clever money versus the accelerationists reaches its crescendo here: The real poverty in Noys’ paper on grammar of neoliberalism is in his embarrassingly piss poor grasp of labor theory, and his obsession with the ideology of neoliberalism, rather than real relations of production. Icing on the cake happens with the #accelerate club seeming to be a variation of the post-humanist desire-assemblage forming among the 25-35 year old Caucasianistas that wants us to get our Übermensch on without giving up Xboxes and smartphones…..