As is suggestive of the name, ARCs are required to repackage assets to make them more saleable. But, in the context of bad loans, or non-performing assets, such companies often falter to garner enough firepower to root out the surging menace of NPAs. The Indian context is caused primarily by a systemic rot involving faulty practices of project finance and subsequent difficulties in recoveries on loans. ARCs are constituted to precisely address such hurdles. With their status as centralised agencies, these are programmed to buy up stressed/distressed and non-performing assets and repackage them to sell them to prospective promoters/buyers. ARCs are programmed to buy NPAs at a discounted price, which in turn help the banks and lenders to clean up their sticky balance sheets. ARCs can either be public, private or jointly owned, and are also armed to float bonds to recover dues from borrowers. Even if on paper the concept of an ARC looks robust with scalability to concoct a bad asset with a performing one in order to increase its saleability, in reality, ARCs are prone to failures for lack of buyers for their packages and limited by capital concerns. But, there are challenges galore for ARCs viz. debt aggregation is a far cry, and unless this is done, resolution will always be expeditious; hunt for fresh financial support; and discrepancy between banks and ARCs in pricing of assets, unless reached a commonality would continue to remain a contentious issue.

The whole concept of Asset Reconstruction Companies (ARCs) is closely modelled on the US model of Asset Management Companies (AMCs), and is thus a large industry in itself as far as buying and selling off of debts are concerned. It resembles a time to strike as the ducks are now lined, and the opportunities galore in private equities as ARCs get a chance to own the entire capital structure and reinstall management echelons, all thanks to Budgetary recommendations with a 100% FDI welcomed. But, it still is going a bit too far, and hence let us examine the evolution first. 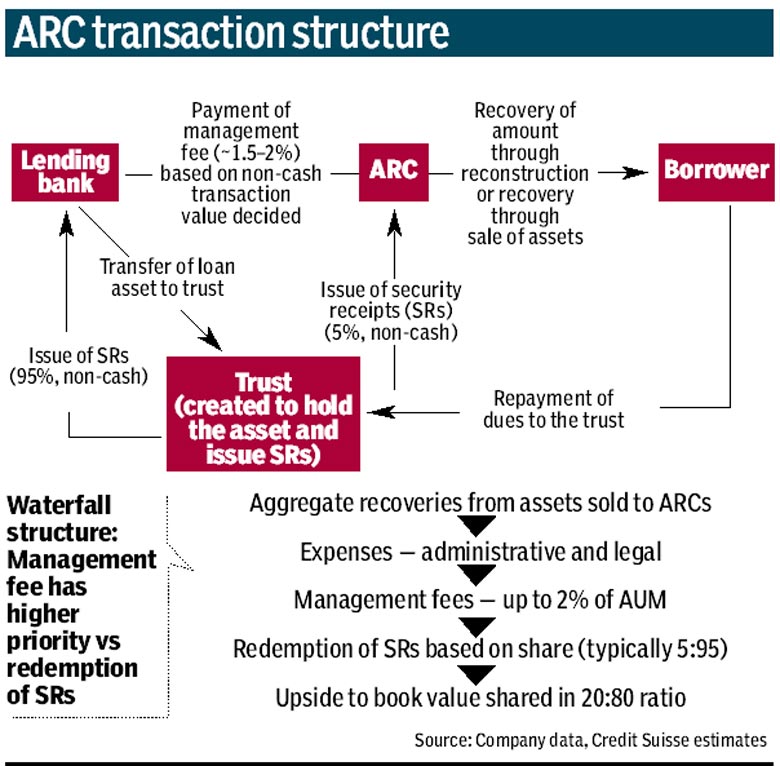 The real trigger for ARCs to flourish came with Raghuram Rajan’s exhortation to banks to clean up its mess. A switch of trajectory happened sometime in 2013, when ever greening bad loans was put on to back burner and let ARCs face up. This is where banks were obligated to turnaround loans until then considered unredeemable. Adding to that trigger point is another one banking on Bankruptcy Code, which promises discount to buying off bad debts or distressed assets at a discount pitting them more profitable a venture compared with greenfield projects of similar magnitude.

ARCs are born out of SARFAESI Act, 2002, (The Securitisation and Reconstruction of Financial Assets and Enforcement of Security Interest Act, 2002) and enable the banks to acquire the securities which had been pledged. all of this was achievable without any interference from the jurisdiction of the civil courts thus lending authoritarian power to banks to cope up with NPAs. But regulatory directives prevented the smooth functioning of transactions involving bad debts, thanks to the decrepit system for enforcing securities. Sale of loans to ARCs is however the last resort banks undertake as statutory hurdles and deposed promoters speed break.

Basically, road to recovery is a step by step process involving, Bank selling a bad loan to ARC; ARCs paying 15% upfront, and issuing the remaining 85% as securities in the form of Security Receipts (SRs), which primarily deals with 5% upfront payment as was the case a year back; ARCs initiating the turnaround and in the process earning 1.5% management fee; recovery proceeds thus accrued get shared by the banks and the ARCs; and if the ARCs fail to recover the bad loans for eight years, the investments get written-off. Now, this can be seen as a clear shift from ever greening, or even liberal funding by the government year-on-year, and aptly reminds internal recapitalization as indispensable. Budgetary infusion or capital infusion or recapitalisation is putting capital for the purpose of helping the ailing public sector banks. The very understanding of PSBs would imply such an infusion required from time to time, but the problem lies in its ritualistic nature. On the contrary, if banks were to internally raise funds for recapitalisation, it would indicate a healthy practice. One reason the government does infusion is to meet Basel III norms, as reliance upon internal fund recapitalisation would not let that be accomplished. But, there is a caveat here to be always kept in mind. Written-off doesn’t necessarily mean that defaults and defaulters are not chased. They are undoubtedly sought after, with the only difference being the clean-up of balance sheets for the year such defaults happen for the banks. And, if they don’t write-offs, or alternatively called charge-offs effectuate helping banks not only erase the mess off their balance sheet, but saving them enormous tax liabilities. The real tussle is between charging-off loans and becoming industrious in selling them off. The winner takes it all, which in this case is hedging equivalent to selling off bad debts, and which is promulgated by the RBI and the government in jettisoning this messy baggage.

The bacterium — strain GFAJ-1 of the Halomonadaceae family of Gammaproteobacteria, not only grows but also incorporates arsenic molecules into its DNA, in place of phosphorus. NASA has aliens…

What about arsenic, in the form of the arsenate ion, subbing for phosphate ions inside the cell? After all, arsenic is the downstairs neighbor to phosphorus on the periodic table of the elements, and phosphate and arsenate are chemical cousins. That similarity contributes to arsenic’s toxicity, arsenate masquerades as the nutrient phosphate and thus gains access to the body’s metabolic system. Just why the bacterium has a penchant for arsenic is not yet clear. Perhaps some life-forms evolved in an arsenic-rich environment and later migrated to a more typical region of Earth, where phosphorus is far more abundant.

Karl Polanyi has often highlighted on the insight about the predicaments of the market. these perils realize that when the markets are left to their own devices, they are enough o cause attrition to the social relations and fabric. However, the social consequences of financial instability can be understood only by employing a Polanyian perspective on how processes of commodification and market expansion jeopardize social institutions. For someone like Hyman Minsky, equilibrium and stability are elusive conditions in markets with debt contracts. His financial instability hypothesis suggests that capitalist economies lead, through their own dynamics, to “the development over historical time of liability structures that cannot be validated by market-determined cash flows or asset values”. According to Minsky, a stable period generates optimistic expectations. Increased confidence and positive expectations of future income streams cause economic actors to decrease margins of safety in their investment decisions. This feeds a surge in economic activity and profits, which turns into a boom as investments are financed by higher degrees of indebtedness. As the economic boom matures, an increasing number of financial intermediaries and firms switch from hedge finance to speculative and Ponzi finance. Minsky argued that economists, misreading Keynes, downplay the role of financial institutions. In particular, he argued that financial innovation can create economic euphoria for a while before destabilizing the economy and hurling it into crises rivaling the Great Depression. Minsky’s insights are evident in the effects of innovations in mortgages and mortgage securities. Actors using speculative and Ponzi finance are vulnerable to macroeconomic volatility and interest rate fluctuations. A boom ends when movements in short-term and long-term interest rates render the liability structures of speculative and Ponzi finance unsustainable. The likelihood of a financial crisis (as opposed to a business cycle) depends on the preponderance of speculative and Ponzi finance in the economy under question.

Minsky regularly criticized economists for failing to grasp Keynes’s ideas. In his book Stabilizing an Unstable Economy Minsky argued that while economists assimilated some of Keynes’s insights into standard economic theory, they failed to grasp the connection between the financial and real sectors. Specifically, he argued that finance is missing from macroeconomic theory, with its focus on capital structure, asset-liability management, agency theory, and contracts. He wrote:

Minsky’s work on financial crises builds on Keynes’s insights, using terms such as “euphoric economy”, and “unrealistic euphoric expectations with respect to costs, markets, and their development over time”. Yet Minsky considered the issues of rational prices and market efficiency as only the tip of an iceberg. His broad framework addresses issues related to the lending practices by financial institutions, central bank policy, fiscal policy, the efficacy of financial market regulation, employment policy, and income distribution. Financial institutions, such as banks, become increasingly innovative in their use of financial products when the business cycle expands, boosting their leverage and funding projects with ever increasing risk. Minsky’s words on financial innovation are striking, as if foretelling the recent crisis.

Over an expansion, new financial instruments and new ways of financing activity develop. Typically, defects of the new ways and the new institutions are revealed when the crunch comes.

Combining Hyman Minsky’s insights on financial fragility with a Polanyian focus on commodification offers a distinct perspective on the causes and consequences of the foreclosure crisis. First, following Polanyi, we should expect to find commodity fiction applied to arenas of social life previously isolated from markets to be at the heart of the recent financial crisis. Second, following Minsky, the transformations caused by novel uses of commodity fiction should be among the primary causes of financial fragility. Finally, in line with a Polanyian focus on the effects of supply-demand-price mechanism, the price fluctuations caused by financial fragility should disrupt existing social relations and institutions in a significant manner. So, how does this all peter down to alt-right? Right-wing libertarianism is basically impossible. The “free” market as we know it today needs the state to be implemented – without reading Polanyi, you just know for example that without the force of the state, you just can’t have private property or all the legal arrangements that underpin property, labour and money. So it wouldn’t work anyway. Polanyi’s point is that if we want democracy to survive, we need to beware of financial overlords and their ideological allies peddling free-market utopias. And if democracy even stinks of stability, then stability is destabilizing as Minsky would have had it, thus corroborating the cross-purposes between the two thinkers in question, at least to the point of a beginning. 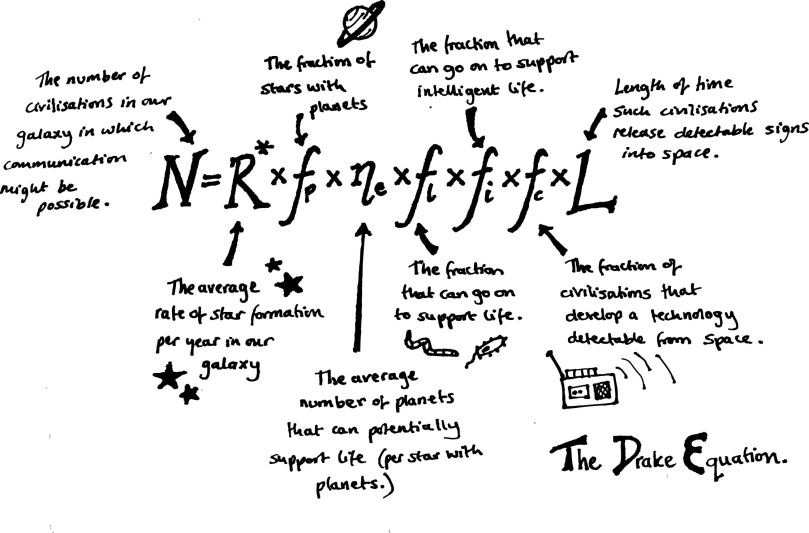 The Drake equation is one of those rare mathematical beasts that has leaked into the public consciousness. It estimates the number of extraterrestrial civilisations that we might be able to detect today or in the near future. Frank Drake attempted to quantify the number by asking what fraction of stars have planets, what fraction of these might be habitable, then the fraction of these on which life actually evolves and the fraction of these on which life becomes intelligent and so on. Many of these numbers are little more than wild guesses. For example, the number of ET civilisations we can detect now is hugely sensitive to the fraction that destroy themselves with their own technology, through nuclear war for example. Obviously we have no way of knowing this figure. Of the many uncertainties in the Drake equation, one term is traditionally thought of as relatively reliable. That is the probability of life emerging on a planet in a habitable zone. On Earth, life arose about 3.8 billion years ago, just a few million years after the planet had cooled sufficiently to allow it. Astrobiologists naturally argue that because life arose so quickly here, it must be pretty likely to emerge in other places where conditions allow.