A category C consists of the following data:

For each ordered pair x, y ∈ C there is a collection HomC (x, y) of arrows. We will write α∶x→y to mean that α ∈ HomC(x,y). Each collection HomC(x,x) has a special element called the identity arrow idx ∶ x → x. We let Arr(C) denote the collection of all arrows in C.

For each ordered triple of objects x, y, z ∈ C there is a function

Let C be a category. A diagram D ⊆ C is a collection of objects in C with some arrows between them. Repetition of objects and arrows is allowed. OR. Let I be any small category, which we think of as an “index category”. Then any functor D ∶ I → C is called a diagram of shape I in C. In either case, we say that the diagram D commutes if for all pairs of objects x,y in D, any two directed paths in D from x to y yield the same arrow under composition.

Isomorphism: Let C be a category. We say that two objects x,y ∈ C are isomorphic in C if there exist arrows α ∶ x → y and β ∶ y → x such that the following diagram commutes: 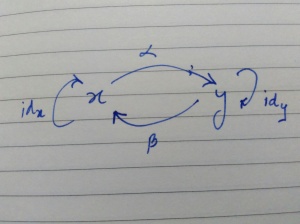 In this case we write x ≅C y, or just x ≅ y if the category is understood.

If γ ∶ y → x is any other arrow satisfying the same diagram as β, then by the axioms of identity and associativity we must have

This allows us to refer to β as the inverse of the arrow α. We use the notations β = α−1 and

Note that Ab ⊆ Grp and CRng ⊆ Rng are both full subcategories. In general, the arrows of a concrete category are called morphisms or homomorphisms. This explains our notation of HomC.

Homotopy: The most famous example of a non-concrete category is the fundamental groupoid π1(X) of a topological space X. Here the objects are points and the arrows are homotopy classes of continuous directed paths. The skeleton is the set π0(X) of path components (really a discrete category, i.e., in which the only arrows are the identities). Categories like this are the reason we prefer the name “arrow” instead of “morphism”.

Limit/Colimit: Let D ∶ I → C be a diagram in a category C (thus D is a functor and I is a small “index” category). A cone under D consists of 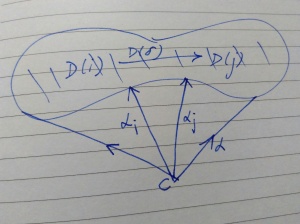 The cone (c,(αi)i∈I) is called a limit of the diagram D if, for any cone (z,(βi)i∈I) under D, the following picture holds:

[This picture means that there exists a unique arrow υ ∶ z → c such that, for each arrow δ ∶ i → j in I (including the identity arrows), the following diagram commutes: 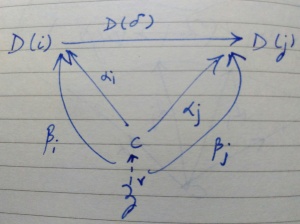 When δ = idi this diagram just says that βi = αi ○ υ. We do not assume that D itself is commutative. Dually, a cone over D consists of an object c ∈ C and a set of arrows αi ∶ D(i) → c satisfying αi = αj ○ D(δ) for each arrow δ ∶ i → j in I. This cone is called a colimit of the diagram D if, for any cone (z,(βi)i∈I) over D, the following picture holds:

When the (unique) limit or colimit of the diagram D ∶ I → C exists, we denote it by (limI D, (φi)i∈I) or (colimI D, (φi)i∈I), respectively. Sometimes we omit the canonical arrows φi from the notation and refer to the object limID ∈ C as “the limit of D”. However, we should not forget that the arrows are part of the structure, i.e., the limit is really a cone.

Products and coproducts exist in Set. The product of S,T ∈ Set consists of the Cartesian product S × T together with the canonical projections πS ∶ S × T → S and πT ∶ S × T → T. The coproduct of S, T ∈ Set consists of the disjoint union S ∐ T together with the canonical injections ιS ∶ S → S ∐ T and ιT ∶ T → S ∐ T. After passing to the skeleton, the product and coproduct of sets become the product and sum of cardinal numbers.

Groups: The trivial group 1 ∈ Grp is a zero object, and for any groups G, H ∈ Grp the zero homomorphism 1 ∶ G → H sends all elements of G to the identity element 1H ∈ H. The product of groups G, H ∈ Grp is their direct product G × H and the coproduct is their free product G ∗ H, along with the usual canonical morphisms.

Let Ab ⊆ Grp be the full subcategory of abelian groups. The zero object and product are inherited from Grp, but we give them new names: we denote the zero object by 0 ∈ Ab and for any A, B ∈ Ab we denote the zero arrow by 0 ∶ A → B. We denote the Cartesian product by A ⊕ B and we rename it the direct sum. The big difference between Grp and Ab appears when we consider coproducts: it turns out that the product group A ⊕ B is also the coproduct group. We emphasize this fact by calling A ⊕ B the biproduct in Ab. It comes equipped with four canonical homomorphisms πA, πB, ιA, ιB satisfying the usual properties, as well as the following commutative diagram:

This diagram is the ultimate reason for matrix notation. The universal properties of product and coproduct tell us that each endomorphism φ ∶ A ⊕ B → A ⊕ B is uniquely determined by its four components φij ∶= πi ○ φ ○ ιj for i, j ∈ {A,B},so we can represent it as a matrix:

Then the composition of endomorphisms becomes matrix multiplication.

Rings. We let Rng denote the category of rings with unity, together with their homomorphisms. The initial object is the ring of integers Z ∈ Rng and the final object is the zero ring 0 ∈ Rng, i.e., the unique ring in which 0R = 1R. There is no zero object. The product of two rings R, S ∈ Rng is the direct product R × S ∈ Rng with component wise addition and multiplication. Let CRng ⊆ Rng be the full subcategory of commutative rings. The initial/final objects and product in CRng are inherited from Rng. The difference between Rng and CRng again appears when considering coproducts. The coproduct of R,S ∈ CRng is denoted by R ⊗Z S and is called the tensor product over Z…..