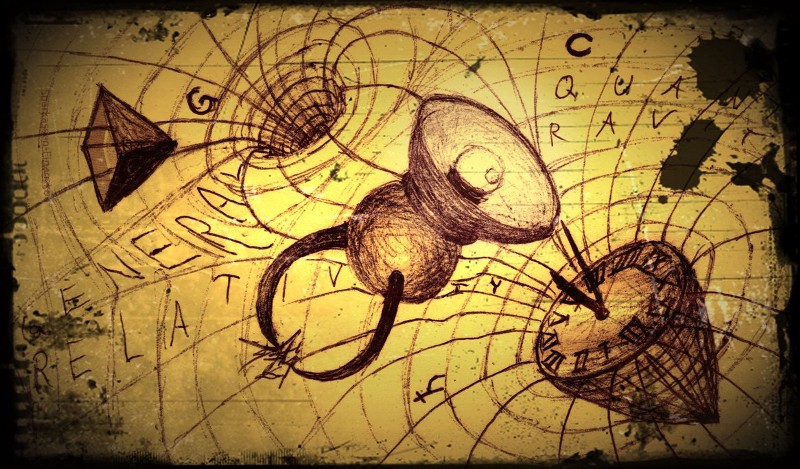 In string theory as well as in Loop Quantum Gravity, and in other approaches to quantum gravity, indications are coalescing that not only time, but also space is no longer a fundamental entity, but merely an “emergent” phenomenon that arises from the basic physics. In the language of physics, spacetime theories such as GTR are “effective” theories and spacetime itself is “emergent”. However, unlike the notion that temperature is emergent, the idea that the universe is not in space and time arguably shocks our very idea of physical existence as profoundly as any scientific revolution ever did. It is not even clear whether we can coherently formulate a physical theory in the absence of space and time. Space disappears in LQG insofar as the physical structures it describes bear little, if any, resemblance to the spatial geometries found in GTR. These structures are discrete and not continuous as classical spacetimes are. They represent the fundamental constitution of our universe that correspond, somehow, to chunks of physical space and thus give rise – in a way yet to be elucidated – to the spatial geometries we find in GTR. The conceptual problem of coming to grasp how to do physics in the absence of an underlying spatio-temporal stage on which the physics can play out is closely tied to the technical difficulty of mathematically relating LQG back to GTR. Physicists have yet to fully understand how classical spacetimes emerge from the fundamental non-spatio-temporal structure of LQG, and philosophers are only just starting to study its conceptual foundations and the implications of quantum gravity in general and of the disappearance of space-time in particular. Even though the mathematical heavy-lifting will fall to the physicists, there is a role for philosophers here in exploring and mapping the landscape of conceptual possibilites, bringing to bear the immense philosophical literature in emergence and reduction which offers a variegated conceptual toolbox.

To understand how classical spacetime re-emerges from the fundamental quantum structure involves what the physicists call “taking the classical limit.” In a sense, relating the spin network states of LQG back to the spacetimes of GTR is a reversal of the quantization procedure employed to formulate the quantum theory in the first place. Thus, while the quantization can be thought of as the “context of discovery,” finding the classical limit that relates the quantum theory of gravity to GTR should be considered the “context of (partial) justification.” It should be emphasized that understanding how (classical) spacetime re-emerges by retrieving GTR as a low-energy limit of a more fundamental theory is not only important to “save the appearances” and to accommodate common sense – although it matters in these respects as well, but must also be considered a methodologically central part of the enterprise of quantum gravity. If it cannot be shown that GTR is indeed related to LQG in some mathematically well-understood way as the approximately correct theory when energies are sufficiently low or, equivalently, when scales are sufficiently large, then LQG cannot explain why GTR has been empirically as successful as it has been. But a successful theory can only be legitimately supplanted if the successor theory not only makes novel predictions or offers deeper explanations, but is also able to replicate the empirical success of the theory it seeks to replace.

Ultimately, of course, the full analysis will depend on the full articulation of the theory. But focusing on the kinematical level, and thus avoiding having to fully deal with the problem of time, lets apply the concepts to the problem of the emergence of full spacetime, rather than just time. Chris Isham and Butterfield identify three types of reductive relations between theories: definitional extension, supervenience, and emergence, of which only the last has any chance of working in the case at hand. For Butterfield and Isham, a theory T1 emerges from another theory T2 just in case there exists either a limiting or an approximating procedure to relate the two theories (or a combination of the two). A limiting procedure is taking the mathematical limit of some physically relevant parameters, in general in a particular order, of the underlying theory in order to arrive at the emergent theory. A limiting procedure won’t work, at least not by itself, due to technical problems concerning the maximal loop density as well as to what essentially amounts to the measurement problem familiar from non-relativistic quantum physics.

An approximating procedure designates the process of either neglecting some physical magni- tudes, and justifying such neglect, or selecting a proper subset of states in the state space of the approximating theory, and justifying such selection, or both, in order to arrive at a theory whose values of physical quantities remain sufficiently close to those of the theory to be approximated. Note that the “approximandum,” the theory to be approximated, in our case will not be GTR, but only its vacuum sector of spacetimes of topology Σ × R. One of the central questions will be how the selection of states will be justified. Such a justification would be had if we could identify a mechanism that “drives the system” to the right kind of states. Any attempt to finding such a mechanism will foist a host of issues known from the traditional problem of relating quantum to classical mechanics upon us. A candidate mechanism, here and there, is some form of “decoherence,” even though that standardly involves an “environment” with which the system at stake can interact. But the system of interest in our case is, of course, the universe, which makes it hard to see how there could be any outside environment with which the system could interact. The challenge then is to conceptualize decoherence is a way to circumvents this problem.

Once it is understood how classical space and time disappear in canonical quantum gravity and how they might be seen to re-emerge from the fundamental, non-spatiotemporal structure, the way in which classicality emerges from the quantum theory of gravity does not radically differ from the way it is believed to arise in ordinary quantum mechanics. The project of pursuing such an understanding is of relevance and interest for at least two reasons. First, important foundational questions concerning the interpretation of, and the relation between, theories are addressed, which can lead to conceptual clarification of the foundations of physics. Such conceptual progress may well prove to be the decisive stepping stone to a full quantum theory of gravity. Second, quantum gravity is a fertile ground for any metaphysician as it will inevitably yield implications for specifically philosophical, and particularly metaphysical, issues concerning the nature of space and time.