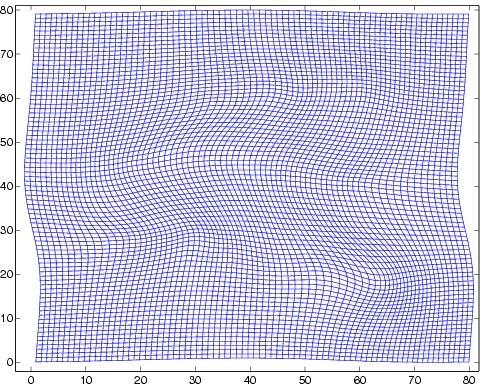 The notion of diffeological space is due to Jean-Marie Souriau.

Let M be a set. Any set map α: U ⊂ Rn → M defined on an open set U of some Rn, n ≥ 0, will be called a plot on M. The name plot is chosen instead of chart to avoid some confusion with the usual notion of chart in a manifold. When possible, a plot α with domain U will be simply denoted by αU.

A diffeology of class C∞ on the set M is any collection P of plots α: Uα ⊂ Rnα → M, nα ≥ 0, verifying the following axioms:

Usually, a diffeology P on the set M is defined by means of a generating set, that is by giving any set G of plots (which is implicitly supposed to contain all constant maps) and taking the least diffeology containing it. Explicitly, the diffeology ⟨G⟩ generated by G is the set of plots α: U → M such that any point t ∈ U has a neighbourhood Ut where α can be written as γ ◦ h for some C∞ map h and some γ ∈ G.

A finite dimensional manifold M is endowed with the diffeology generated by the charts U ⊂ Rn → M, n = dimM, of any atlas.

Let (M,P) be a diffeological space and F : M → N a map of sets. The final diffeology F⋆P on N is that generated by the plots F ◦ α, α ∈ P. A particular case is the quotient diffeology associated to an equivalence relation on M.

Analogously, let (N, Q) be a diffeological space and F : M → N a map of sets. The initial diffeology F⋆Q on M is that generated by the plots α in M such that F ◦ α ∈ Q. A particular case is the induced diffeology on any subset M ⊂ N.

Finally, let D(M,N) be the space of differentiable maps between two diffeological spaces (M,P) and (N,Q). We define the functional diffeology on it by taking as a generating set all plots α: U → D(M,N) such that the associated map α~ : U × M → N given by α~ (t, x) = α(t)(x) is differentiable.

Definition 2.3. A diffeological group is a diffeological space (G,P) endowed with a group structure such that the division map δ : G × G → G, δ(x, y) = xy−1, is differentiable.