The Gross Domestic Product wi of a country i is defined as the “total market value of all final goods and services produced in a country in a given period, equal to total consumer, investment and government spending, plus the value of exports, minus the value of imports”. In other words, there are two main terms contributing to the observed value of the GDP wi of a country i: an endogenous term Ii (also konwn as internal demand) determined by the internal spending due to the country’s economic process and an exogenous term Fi determined by the trade flow with other countries. The above definition can then be rephrased as

where Fi(t), the total trade value of exports and imports by i to/from all other countries will be denoted by fini(t) and fouti(t) respectively, and it can be expressed as

The above definition anticipates that the GDP is strongly affected by the structure of the World Trade topology. Looking at some empirical properties of the GDP:

A fundamental macroeconomic question is: how is the GDP distributed across world countries? To address this point we consider the distribution of the rescaled quantity

where ⟨w⟩ ≡ wT/N is the average GDP and wT(t) ≡ ∑i=1N(t) wi(t) is the total one. In the figure below, is the cumulative distribution 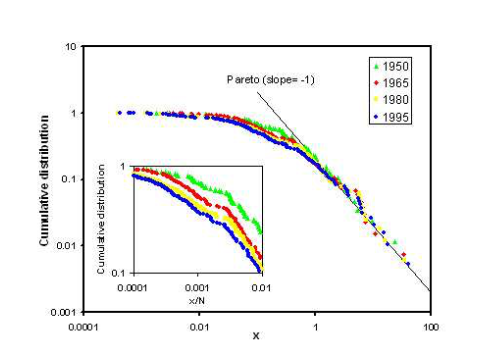 Figure: Normalized cumulative distribution of the relative GDP xi(t) ≡ wi(t)/⟨w⟩(t) for all world countries at four different snapshots. Inset: the same data plotted in terms of the rescaled quantity yi(t) ≡ wi(t)/wT(t) = xi(t)/N(t) for the transition region to a power-law curve.

for four different years in the time interval considered. The right tail of the distribution roughly follows a straight line in log-log axes, corresponding to a power-law curve

with exponent 1 − α = −1, which indicates a tail in the GDP probability distribution ρ(x) ∝ x−α with α = 2. This behaviour is qualitatively similar to the power-law character of the per capita GDP distribution.

Moreover, it can be seen that the cumulative distribution departs from the power-law behaviour in the small x region, and that the value x∗ where this happens is larger as time increases. However, if xi(t) is rescaled to

then the point y∗ = x∗/N ≈ 0.003 where the power-law tail of the distribution starts is approximately constant in time (see inset of figure). This suggests that the temporal change of x∗ is due to the variation of N(t) affecting ⟨w(t)⟩ and not to other factors. This is because the temporal variation of N(t) affects the average-dependent quantities such as x: note that, while for a system with a fixed number N of units wT would be simply proportional to the average value ⟨w⟩. In particular, the average values of the quantities of interest may display sudden jumps due to the steep increase of N(t) rather than to genuine variations of the quantities themselves…..