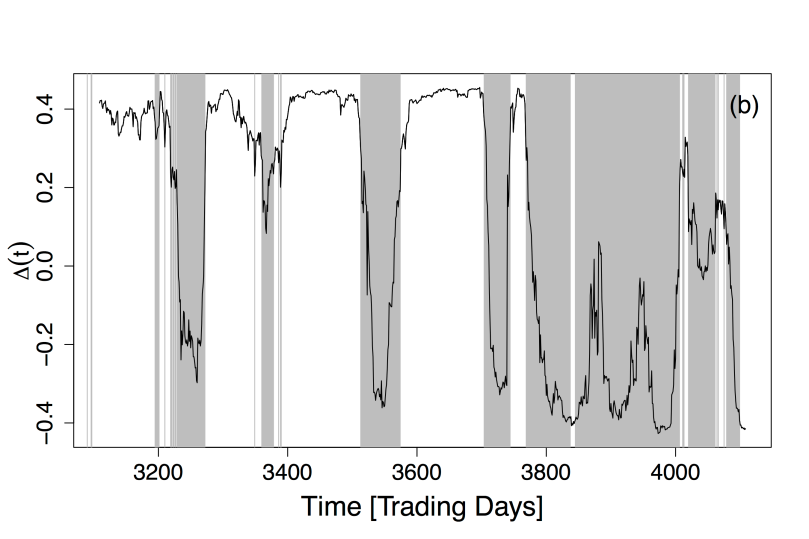 What is an arbitrage? Basically it means ”to get something from nothing” and a free lunch after all. More strict definition states the arbitrage as an operational opportunity to make a risk-free profit with a rate of return higher than the risk-free interest rate accured on deposit.

The arbitrage appears in the theory when we consider a curvature of the connection. A rate of excess return for an elementary arbitrage operation (a difference between rate of return for the operation and the risk-free interest rate) is an element of curvature tensor calculated from the connection. It can be understood keeping in mind that a curvature tensor elements are related to a difference between two results of infinitesimal parallel transports performed in different order. In financial terms it means that the curvature tensor elements measure a difference in gains accured from two financial operations with the same initial and final points or, in other words, a gain from an arbitrage operation.

In a certain sense, the rate of excess return for an elementary arbitrage operation is an analogue of the electromagnetic field. In an absence of any uncertanty (or, in other words, in an absense of walks of prices, exchange and interest rates) the only state is realised is the state of zero arbitrage. However, if we place the uncertenty in the game, prices and the rates move and some virtual arbitrage possibilities to get more than less appear. Therefore we can say that the uncertanty play the same role in the developing theory as the quantization did for the quantum gauge theory.

What of “matter” fields then, which interact through the connection. The “matter” fields are money flows fields, which have to be gauged by the connection. Dilatations of money units (which do not change a real wealth) play a role of gauge transformation which eliminates the effect of the dilatation by a proper tune of the connection (interest rate, exchange rates, prices and so on) exactly as the Fisher formula does for the real interest rate in the case of an inflation. The symmetry of the real wealth to a local dilatation of money units (security splits and the like) is the gauge symmetry of the theory.

A theory may contain several types of the “matter” fields which may differ, for example, by a sign of the connection term as it is for positive and negative charges in the electrodynamics. In the financial stage it means different preferances of investors. Investor’s strategy is not always optimal. It is due to partially incomplete information in hands, choice procedure, partially, because of investors’ (or manager’s) internal objectives. Physics of Finance