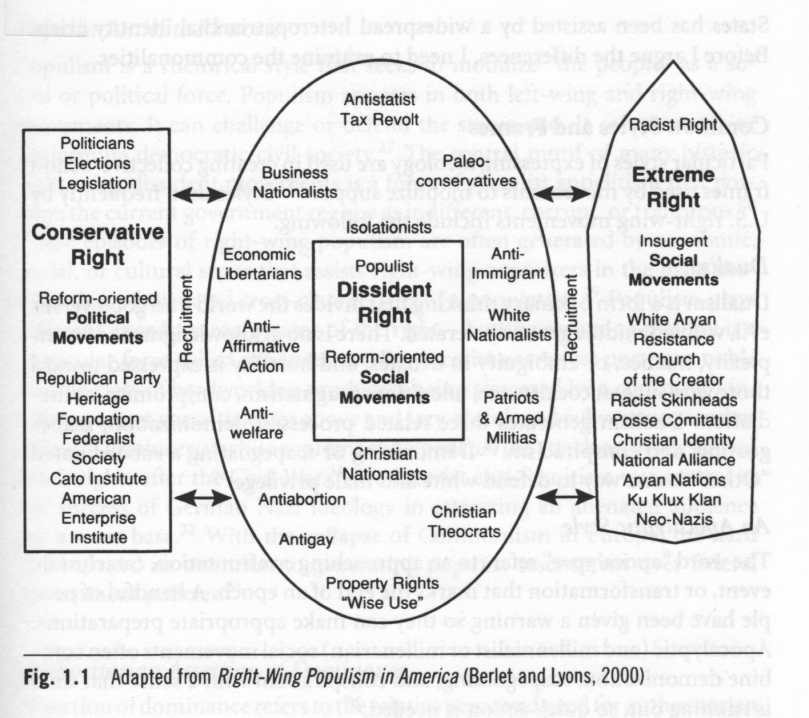 In the context of the extreme right-wing politics in the contemporary age, groupuscules can be defined as numerically negligible political, frequently meta-political, but never party-political entities formed to pursue palingenetic ideological, organizational or activistic ends with an ultimate goal of overcoming the decadence of the liberal-democratic system. Though, they are fully formed and autonomous, they have small active memberships and minimal, if any public visibility or support, which is now inflating. Yet they acquire enhanced influence and significance through the ease with which they can be associated, even if only in the minds of political extremists, with other group lets which are sufficiently aligned ideologically and tactically to complement each other’s activities in their bid to institute a new type of society. As a result the groupuscule has Janus-headed characteristic of combining organizational autonomy with the ability to create informal linkages with, or reinforce the influence of other such formations. This enables groupuscules, when considered in terms of their aggregate impact on politics and society, to be seen as forming a non-hierarchical, leaderless and centreless, or rather polycentric movement with fluid boundaries and constantly changing components. This groupuscular right has the characteristics of a political and ideological subculture rather than a conventional political party movement, and is perfectly adapted to the task of perpetuating revolutionary extremism in an age of relative political stability.

The outstanding contrast between the groupuscular and party-political organization of the extreme right is that instead of being formed into a tree-like hierarchical organisms it is now rhizomatic. The use of the term was pioneered in the spirit of post-structuralist radicalism by Deleuze and Guattari to help conceptualize the social phenomena to which, metaphorically at least, the attributes of supra-personal organic life-forms can be ascribed, but which are not structured in a coherently hierarchical or systematically interconnected way which would make tree-based or dendroid metaphors appropriate. When applied to groupuscular right the concept of rhizome throws itself into relief its dynamic nature as a polycentric, leaderless movement by stressing that it does not operate like a single organism such as a tree with a tap-root, branch and canopy, and a well-defined beginning and an end. Instead, it behaves like the root-system of some species of grass or tuber, displaying multiple starts and beginnings which intertwine and connect with each other, constantly producing new shoots as others die off in an unpredictable, asymmetrical pattern of growth and decay. If a political network has a rhizomes political structure it means that it forms a cellular, capillary network with ill-defined boundaries and no formal hierarchy or internal organizational structure to give it a unified intelligence. Thanks to its rhizomic structure the groupuscular right no longer emulates a singular living organism, as the slime-mould is so mysteriously capable of doing. Nor is it to be seen as made up of countless tiny, disconnected micro-organisms. Instead, following an internal dynamic which only the most advanced life sciences can model with any clarity, the minute bursts of spontaneous creativity which produce and maintain individual groupuscules constitute nodal points in a force-field or web of radical political energy which fuels the vitality and viability of the organism as a whole. These qualities duplicate the very features of the Internet for making it impossible to shut down or wipe out the information it contains simply by knocking out any one part of it, since there is no mission control to destroy. The groupuscularity of the contemporary extreme right makes it eminently able to survive and grow even if some of the individual organizations which constitute it are banned and their websites closed down.

From Slime Mould to Rhizome