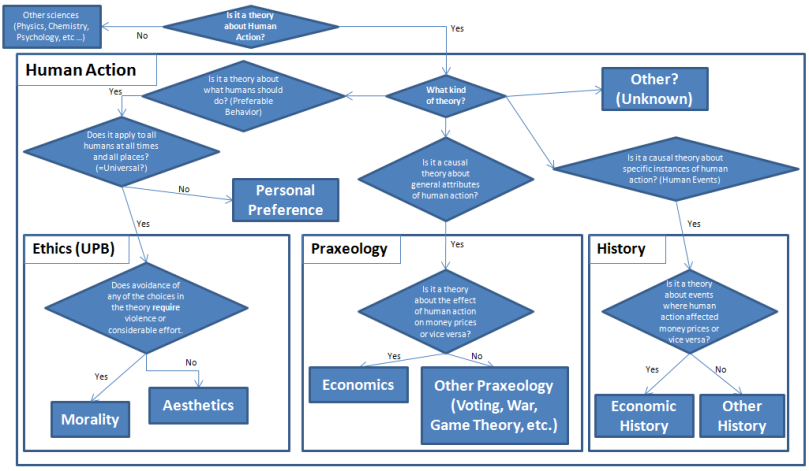 Within the Austrian economics (here, here, here and here), the a priori stance has dominated a tradition running from Carl Menger to Murray Rothbard. The idea here is that the basic structures of economy is entrenched in the more basic structures of human action as such. Nowhere is this more evident than in the work of Ludwig von Mises – his so-called ‘praxeology’, which rests on the fundamental axiom that individual human beings act on the primordial fact that individuals engage in conscious actions toward chosen goals, is built from the idea that all basic laws of economy can be derived apriorically from one premiss: the concept of human action. Of course, this concept is no simple concept, containing within itself purpose, product, time, scarcity of resources, etc. – so it would be more fair to say that economics lies as the implication of the basic schema of human action as such.

Even if the Austrian economists’ conception of the a priori is decidedly objectivist and anti-subjectivist, it is important to remark their insistence on subjectivity within their ontological domain. The Austrian economics tradition is famous exactly for their emphasis on the role of subjectivity in economy. From Carl Menger onwards, they protest against the mainstream economical assumption that the economic agent in the market is fully rational, knows his own preferences in detail, has constant preferences over time, has access to all prices for a given commodity at a given moment, etc. Thus, von Mises’ famous criticism of socialist planned economy is built on this idea: the system of ever-changing prices in the market constitutes a dispersed knowledge about the conditions of resource allocation which is a priori impossible for any single agent – let alone, any central planner’s office – to possess. Thus, their conception of the objective a priori laws of the economic domain perhaps surprisingly had the implication that they warned against a too objectivist conception of economy not taking into account the limits of economic rationality stemming from the general limitations of the capacities of real subjects. Their ensuing liberalism is thus built on a priori conclusions about the relative unpredictability of economics founded on the role played by subjective intentionality. For the same reason, Hayek ended up with a distinction between simple and complex processes, respectively, cutting across all empirical disciplines, where only the former permit precise, predictive, quantitative calculi based on mathemathical modeling while the latter permit only recognition of patterns (which may also be mathematically modeled, to be sure, but without quantitative predictability). It is of paramount importance, though, to distinguish this emphasis on the ineradicable role of subjectivity in certain regional domains from Kantian-like ideas about the foundational role of subjectivity in the construction of knowledge as such. The Austrians are as much subjectivists in the former respect as they are objectivists in the latter. In the history of economics, the Austrians occupy a middle position, being against historicism on the one hand as well as against positivism on the other. Against the former, they insist that a priori structures of economy transgress history which does not possess the power to form institutions at random but only as constrained by a priori structures. And against the latter, they insist that the mere accumulation of empirical data subject to induction will never in itself give rise to the formation of theoretical insights. Structures of intelligible concepts are in all cases necessary for any understanding of empirical regularities – in so far, the Austrian a priori approach is tantamount to a non-skepticist version of the doctrine of ‘theory-ladenness’ of observations.

A late descendant of the Austrian tradition after its emigration to the Anglo-Saxon world (von Mises, Hayek, and Schumpeter were such emigrés) was the anarcho-liberal economist Murray Rothbard, and it is the inspiration from him which allows Barry Smith to articulate the principles underlying the Austrians as ‘fallibilistic apriorism’. Rothbard characterizes in a brief paper what he calls ‘Extreme Apriorism’ as follows:

there are two basic differences between the positivists’ model science of physics on the one hand, and sciences dealing with human actions on the other: the former permits experimental verification of consequences of hypotheses, which the latter do not (or, only to a limited degree, we may add); the former admits of no possibility of testing the premisses of hypotheses (like: what is gravity?), while the latter permits a rational investigation of the premisses of hypotheses (like: what is human action?). This state of affairs makes it possible for economics to derive its basic laws with absolute – a priori – certainty: in addition to the fundamental axiom – the existence of human action – only two empirical postulates are needed: ‘(1) the most fundamental variety of resources, both natural and human. From this follows directly the division of labor, the market, etc.; (2) less important, that leisure is a consumer good’. On this basis, it may e.g. be inferred, ‘that every firm aims always at maximizing its psychic profit’.

Rothbard draws forth this example so as to counterargue traditional economists who will claim that the following proposition could be added as a corollary: ‘that every firm aims always at maximizing its money profit’. This cannot be inferred and is, according to Rothbard, an economical prejudice – the manager may, e.g. prefer for nepotistic reasons to employ his stupid brother even if that decreases the firm’s financial profit possibilities. This is an example of how the Austrians refute the basic premiss of absolute rationality in terms of maximal profit seeking. Given this basis, other immediate implications are:

the means-ends relationship, the time-structure of production, time-preference, the law of diminishing marginal utility, the law of optimum returns, etc.

Rothbard quotes Mises for seeing the fundamental Axiom as a ‘Law of Thought’ – while he himself sees this as a much too Kantian way of expressing it, he prefers instead the simple Aristotelian/Thomist idea of a ‘Law of Reality’. Rothbard furthermore insists that this doctrine is not inherently political – in order to attain the Austrians’ average liberalist political orientation, the preference for certain types of ends must be added to the a priori theory (such as the preference for life over death, abundance over poverty, etc.). This also displays the radicality of the Austrian approach: nothing is assumed about the content of human ends – this is why they will never subscribe to theories about Man as economically rational agent or Man as necessarily economical egotist. All different ends meet and compete on the market – including both desire for profit in one end and idealist, utopian, or altruist goals in the other. The principal interest, in these features of economical theory is the high degree of awareness of the difference between the – extreme – synthetic a priori theory developed, on the one hand, and its incarnation in concrete empirical cases and their limiting conditions on the other.