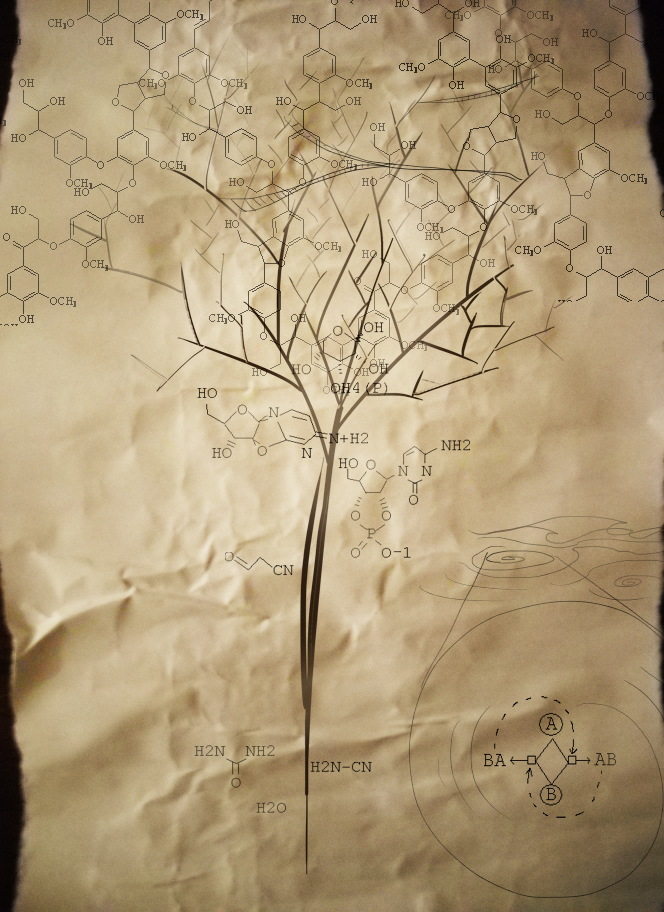 Given a network of catalyzed chemical reactions, a (sub)set R of such reactions is called:

The food set F contains molecules that are assumed to be freely available in the environment. Thus, an RAF set formally captures the notion of “catalytic closure”, i.e., a self-sustaining set supported by a steady supply of (simple) molecules from some food set….

Stuart Kauffman begins with the Darwinian idea of the origin of life in a biological ‘primordial soup’ of organic chemicals and investigates the possibility of one chemical substance to catalyze the reaction of two others, forming new reagents in the soup. Such catalyses may, of course, form chains, so that one reagent catalyzes the formation of another catalyzing another, etc., and self-sustaining loops of reaction chains is an evident possibility in the appropriate chemical environment. A statistical analysis would reveal that such catalytic reactions may form interdependent networks when the rate of catalyzed reactions per molecule approaches one, creating a self-organizing chemical cycle which he calls an ‘autocatalytic set’. When the rate of catalyses per reagent is low, only small local reaction chains form, but as the rate approaches one, the reaction chains in the soup suddenly ‘freeze’ so that what was a group of chains or islands in the soup now connects into one large interdependent network, constituting an ‘autocatalytic set’. Such an interdependent reaction network constitutes the core of the body definition unfolding in Kauffman, and its cyclic character forms the basic precondition for self-sustainment. ‘Autonomous agent’ is an autocatalytic set able to reproduce and to undertake at least one thermodynamic work cycle.

This definition implies two things: reproduction possibility, and the appearance of completely new, interdependent goals in work cycles. The latter idea requires the ability of the autocatalytic set to save energy in order to spend it in its own self-organization, in its search for reagents necessary to uphold the network. These goals evidently introduce a – restricted, to be sure – teleology defined simply by the survival of the autocatalytic set itself: actions supporting this have a local teleological character. Thus, the autocatalytic set may, as it evolves, enlarge its cyclic network by recruiting new subcycles supporting and enhancing it in a developing structure of subcycles and sub-sub-cycles.

Kauffman proposes that the concept of ‘autonomous agent’ implies a whole new cluster of interdependent concepts. Thus, the autonomy of the agent is defined by ‘catalytic closure’ (any reaction in the network demanding catalysis will get it) which is a genuine Gestalt property in the molecular system as a whole – and thus not in any way derivable from the chemistry of single chemical reactions alone.

Kauffman’s definitions on the basis of speculative chemistry thus entail not only the Kantian cyclic structure, but also the primitive perception and action phases of Uexküll’s functional circle. Thus, Kauffman’s definition of the organism in terms of an ‘autonomous agent’ basically builds on an Uexküllian intuition, namely the idea that the most basic property in a body is metabolism: the constrained, organizing processing of high-energy chemical material and the correlated perception and action performed to localize and utilize it – all of this constituting a metabolic cycle coordinating the organism’s in- and outside, defining teleological action. Perception and action phases are so to speak the extension of the cyclical structure of the closed catalytical set to encompass parts of its surroundings, so that the circle of metabolism may only be completed by means of successful perception and action parts.

The evolution of autonomous agents is taken as the empirical basis for the hypothesis of a general thermodynamic regularity based on non-ergodicity: the Big Bang universe (and, consequently, the biosphere) is not at equilibrium and will not reach equilibrium during the life-time of the universe. This gives rise to Kauffman’s idea of the ‘adjacent possible’. At a given point in evolution, one can define the set of chemical substances which do not exist in the universe – but which is at a distance of one chemical reaction only from a substance already existing in the universe. Biological evolution has, evidently, led to an enormous growth of types of organic macromolecules, and new such substances come into being every day. Maybe there is a sort of chemical potential leading from the actually realized substances and into the adjacent possible which is in some sense driving the evolution? In any case, Kauffman claims the hypothesis that the biosphere as such is supercritical in the sense that there is, in general, more than one action catalyzed by each reagent. Cells, in order not to be destroyed by this chemical storm, must be internally subcritical (even if close to the critical boundary). But if the biosphere as such is, in fact, supercritical, then this distinction seemingly a priori necessitates the existence of a boundary of the agent, protecting it against the environment.