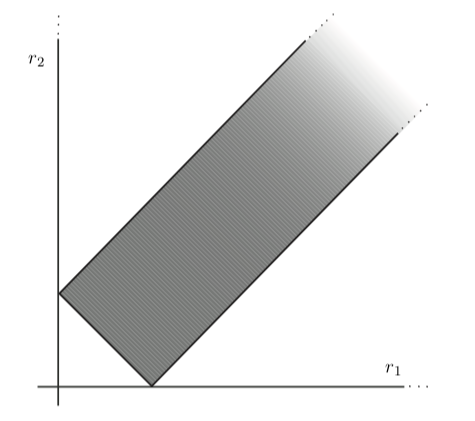 If b ∈ ∂(log(S) × {0}), then f−1(b) has a slightly more complicated singularity, but only one. Let us examine how the “generic” singular fiber fits in here. In particular, for b in the interior of log(S) × {0}, locally this discriminant locus splits B into two regions, and these regions represent two different possible smoothings of f−1(b).

Assume now that f : X → B is a special Lagrangian fibration with topology and discriminant locus ∆ being an amoeba. Let b ∈ Int(∆), and set M = f−1(b). Set Mo = M\{x1, x2}, where x1, x2 are the two conical singularities of M. Suppose that the tangent cones to these two conical singularities, C1 and C2, are both cones of the form M0. Then the links of these cones, Σ1 and Σ2, are T2’s, and one expects that topologically these can be described as follows. Note that Mo ≅ (T2\{y1, y2}) × S1 where y1, y2 are two points in T2. We assume that the link Σi takes the form γi × S1, where γi is a simple loop around yi. If these assumptions hold, then to see how M can be smoothed, we consider the restriction maps in cohomology

Suppose that in this new basis, the image of the restriction map is spanned by the pairs (f11, rf22) and (rf12, f21) for r > 0, r ≠ 1. Then, there are two possible ways of smoothing M, either by gluing in M1(a,0,0) and M2(0,ra,0) at the singular points x1 and x2 respectively, or by gluing in M1(0,ra,0) and M2(a,0,0) at x1 and x2 respectively. This could correspond to deforming M to a fiber over a point on one side of the discriminant locus of f or the other side. This at least gives a plausibility argument for the existence of a special Lagrangian fibration of the topological type given by f. To date, no such fibrations have been constructed, however.

Now, under dualizing, positive and negative vertices are interchanged. Thus the discriminant locus must change. This is all quite speculative, of course, and underlying this is the assumption that the discriminant loci are just fattenings of the graphs. However, it is clear that a new notion of dualizing is necessary to cover this eventuality.