It is true that, in our contemporary world, traditional utopian models have withered, but today a new utopia of canonical majority has taken over the space of any action transformative of current social relations. Instead of radicalness, conformity has become the main expression of solidarity for the subject abandoned to her consecrated individuality. Where past utopias inscribed a collective vision to be fulfilled for future generations, the present utopia confiscates the future of the individual, unless she registers in a collective, popularized expression of the norm that reaps culture, politics, morality, and the like. The ideological outcome of the canonical utopia is the belief that the majority constitutes a safety net for individuality. If the future of the individual is bleak, at least there is some hope in saving his/her present.

This condition reiterates Ernst Bloch’s distinction between anticipatory and compensatory utopia, with the latter gaining ground today (Ruth Levitas). By discarding the myth of a better future for all, the subject succumbs to the immobilizing myth of a safe present for herself (the ultimate transmutation of individuality to individualism). The world can surmount Difference, simply by taking away its painful radicalness, replacing it with a non-violent, pluralistic, and multi-cultural present, as Žižek harshly criticized it for its anti-rational status. In line with Badiou and Jameson, Žižek discerns behind the multitude of identities and lifestyles in our world the dominance of the One and the eradication of Difference (the void of antagonism). It would have been ideal, if pluralism were not translated to populism and the non-violent to a sanctimonious respect of Otherness.

Badiou also points to the nihilism that permeates modern ethicology that puts forward the “recognition of the other”, the respect of “differences”, and “multi-culturalism”. Such ethics is supposed to protect the subject from discriminatory behaviours on the basis of sex, race, culture, religion, and so on, as one must display “tolerance” towards others who maintain different thinking and behaviour patterns. For Badiou, this ethical discourse is far from effective and truthful, as is revealed by the competing axes it forges (e.g., opposition between “tolerance” and “fanaticism”, “recognition of the other” and “identitarian fixity”).

Badiou denounces the decomposed religiosity of current ethical discourse, in the face of the pharisaic advocates of the right to difference who are “clearly horrified by any vigorously sustained difference”. The pharisaism of this respect for difference lies in the fact that it suggests the acceptance of the other, in so far as s/he is a “good other”; in other words, in so far as s/he is the same as everyone else. Such an ethical attitude ironically affirms the hegemonic identity of those who opt for integration of the different other, which is to say, the other is requested to suppress his/her difference, so that he partakes in the “Western identity”.

Rather than equating being with the One, the law of being is the multiple “without one”, that is, every multiple being is a multiple of multiples, stretching alterity into infinity; alterity is simply “what there is” and our experience is “the infinite deployment of infinite differences”. Only the void can discontinue this multiplicity of being, through the event that “breaks” with the existing order and calls for a “new way of being”. Thus, a radical utopian gesture needs to emerge from the perspective of the event, initiating a truth process.

Let (M, gab) be the background relativistic spacetime. We are assuming it is temporally orientable and endowed with a particular temporal orientation. Let ξa be a smooth, future-directed unit timelike vector field on M (or some open subset of M). We understand it to represent the four-velocity field of a fluid. Further, let hab be the spatial projection field determined by ξa. The rotation and expansion fields associated with ξa are defined as follows:

They are smooth fields, orthogonal to ξa in both indices, and satisfy

Let γ be an integral curve of ξa, and let p be a point on the image of γ. Further, let ηa be a vector field on the image of γ that is carried along by the flow of ξa and orthogonal to ξa at p. (It need not be orthogonal to ξa elsewhere.) We think of the image of γ as the worldline of a fluid element O, and think of ηa at p as a “connecting vector” that spans the distance between O and a neighboring fluid element N that is “infinitesimally close.” The instantaneous velocity of N relative to O at p is given by ξa∇aηb. But ξa∇aηb = ηa∇aξb. So, by equation (3) and the orthogonality of ξa with ηa at p, we have

at the point. Here we have simply decomposed the relative velocity vector into two components. The first, (ωabηa), is orthogonal to ηa since ωab is anti-symmetric. It is naturally understood as the instantaneous rotational velocity of N with respect to O at p. 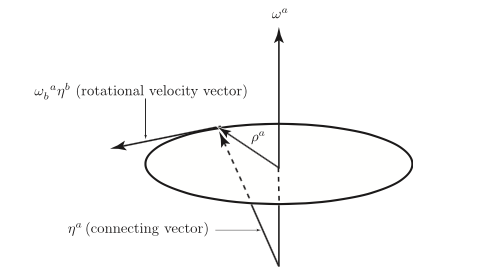 The angular velocity (or twist) vector ωa. It points in the direction of the instantaneous axis of rotation of the fluid. Its magnitude ∥ωa∥ is the instantaneous angular speed of the fluid about that axis. Here ηa connects the fluid element O to the “infinitesimally close” fluid element N. The rotational velocity of N relative to O is given by ωbaηb. The latter is orthogonal to ηa.

In support of this interpretation, consider the instantaneous rate of change of the squared length (−ηbηb) of ηa at p. It follows from equation (4) that

Thus the rate of change depends solely on θab. Suppose θab = 0. Then the instantaneous velocity of N with respect to O at p has a vanishing radial component. If ωab ≠ 0, N can still have non-zero velocity there with respect to O. But it can only be a rotational velocity. The two conditions (θab = 0 and ωab ≠ 0) jointly characterize “rigid rotation.”

at p. (Here εabcd is a volume element defined on some open set containing p. Clearly, if we switched from the volume element εabcd to its negation, the result would be to replace ωa with −ωa.)

If follows from equation (6) (and the anti-symmetry of εabcd) that ωa is orthogonal to ξa. It further follows that

The second equality follows from the anti-symmetry of εabcd, and the third from the fact that εabcdξb is orthogonal to ξa in all indices.) The equation (6) has exactly the same form as the definition of the magnetic field vector Ba determined relative to a Maxwell field Fab and four-velocity vector ξa (Ba = 1/2 εabcd ξb Fcd). It is for this reason that the magnetic field is sometimes described as the “rotational component of the electromagnetic field.”