What is the cause of large market fluctuation? Some economists blame irrationality behind the fat-tail distribution. Some economists observed that social psychology might create market fad and panic, which can be modeled by collective behavior in statistical mechanics. For example, the bi-modular distribution was discovered from empirical data in option prices. One possible mechanism of polarized behavior is collective action studied in physics and social psychology. Sudden regime switch or phase transition may occur between uni-modular and bi-modular distribution when field parameter changes across some threshold. The Ising model in equilibrium statistical mechanics was borrowed to study social psychology. Its phase transition from uni-modular to bi-modular distribution describes statistical features when a stable society turns into a divided society. The problem of the Ising model is that its key parameter, the social temperature, has no operational definition in social system. A better alternative parameter is the intensity of social interaction in collective action.

A difficult issue in business cycle theory is how to explain the recurrent feature of business cycles that is widely observed from macro and financial indexes. The problem is: business cycles are not strictly periodic and not truly random. Their correlations are not short like random walk and have multiple frequencies that changing over time. Therefore, all kinds of math models are tried in business cycle theory, including deterministic, stochastic, linear and nonlinear models. We outline economic models in terms of their base function, including white noise with short correlations, persistent cycles with long correlations, and color chaos model with erratic amplitude and narrow frequency band like biological clock. 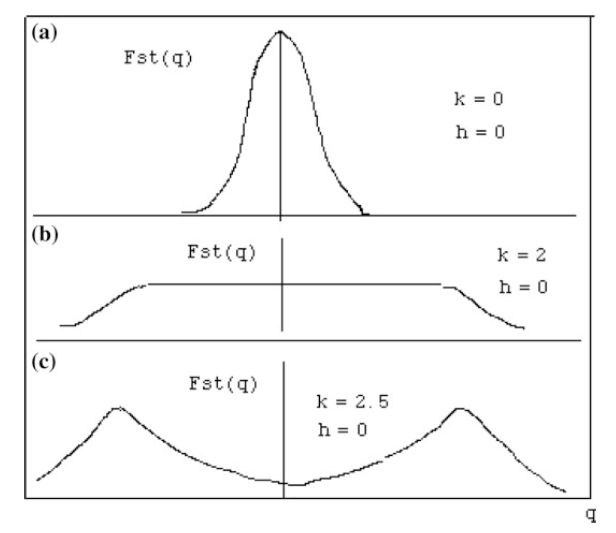 Deterministic models are used by Keynesian economists for endogenous mechanism of business cycles, such as the case of the accelerator-multiplier model. The stochastic models are used by the Frisch model of noise-driven cycles that attributes external shocks as the driving force of business fluctuations. Since 1980s, the discovery of economic chaos and the application of statistical mechanics provide more advanced models for describing business cycles. Graphically, 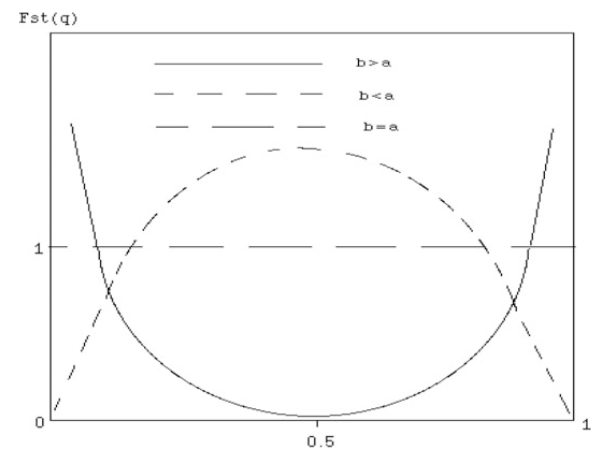 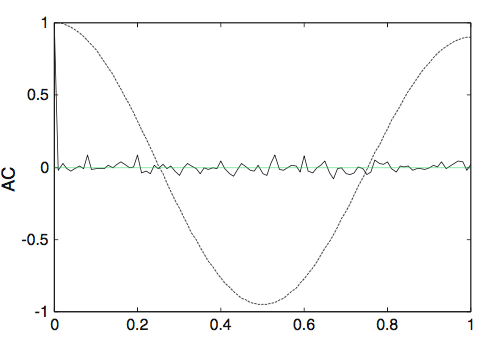 Numerical 1 autocorrelations from time series generated by random noise and harmonic wave. The solid line is white noise. The broken line is a sine wave with period P = 1.

The deterministic model of chaos can be classified into white chaos and color chaos. White chaos is generated by nonlinear difference equation in discrete-time, such as one-dimensional logistic map and two-dimensional Henon map. Its autocorrelations and power spectra look like white noise. Its correlation dimension can be less than one. White noise model is simple in mathematical analysis but rarely used in empirical analysis, since it needs intrinsic time unit. 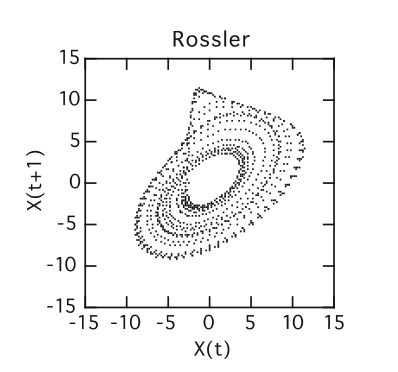 History shows the remarkable resilience of a market that experienced a series of wars and crises. The related issue is why the economy can recover from severe damage and out of equilibrium? Mathematically speaking, we may exam the regime stability under parameter change. One major weakness of the linear oscillator model is that the regime of periodic cycle is fragile or marginally stable under changing parameter. Only nonlinear oscillator model is capable of generating resilient cycles within a finite area under changing parameters. The typical example of linear models is the Samuelson model of multiplier-accelerator. Linear stochastic models have similar problem like linear deterministic models. For example, the so-called unit root solution occurs only at the borderline of the unit root. If a small parameter change leads to cross the unit circle, the stochastic solution will fall into damped (inside the unit circle) or explosive (outside the unit circle) solution.

One thought on “Econophysics: Financial White Noise Switch. Thought of the Day 115.0”